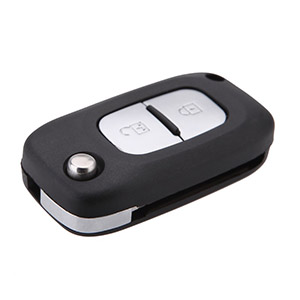 Why are car keys so expensive?

Buying a car key from a main dealer can be an expensive business – but which are the costliest and why? However, there are ways you can get a replacement car key more cheaply.

There was a time when a car key was just that – a key that locked and unlocked your vehicle. But those days are long gone, today, they are highly sophisticated pieces of technology

As a result of this development, it also means they are much more expensive to replace if a key is lost or stolen – and this is a regular occurrence: two million motorists are estimated to have permanently lost their keys over the years. The average cost to replace a car key in the UK – including key coding and VAT – is £320, according to figures from insurance company Nimblefins. This is a £60 increase on the average replacement cost in 2018. It is thought that UK drivers spend millions each year buying replacement keys.

The amount you pay for a car key varies markedly depending on the make and model you have. The most expensive key to replace, according to Nimblefins, is the Mercedes-Benz A Class AMG, which will set you back a cool £532. Other costly replacement keys include the Toyota Yaris T, which will set owners back £390, followed by the Volkwagen Golf TSI (£329) and Vauxhall Corsa Turbo (£317).

Why car keys are expensive

As to why keys are so expensive, it is down to the complexity of the technology inside them, and because the fob must be programmed specifically to work with your vehicle. There can sometimes be variations in price within a make and model, depending on the functionality of the key. In addition, keys for newer models tend to have greater functionality that those for older models – even if there are just a few years between their manufacture.

There is also a premium to be paid by buying a replacement key from a main dealer. Dealers will charge for the raw blank remote key, the cutting of it – even ‘keyless’ proximity keys need a blade cutting for emergencies – and programming it, both of which take time, so labour costs have to be included. Factor in that they will also want to make a profit on the service, then you can see how the costs mount up.

Replacing lost car keys is also something that is not always covered by insurance policies, although this varies from company to company. Stolen keys are covered if you have key cover, although this isn’t standard on every policy – some have it as an optional extra. Its worth checking your policy documents to see if keys are covered or not.

But with the cost of many things increasing now – from energy to used cars – drivers can ill afford to be spending hundreds of pounds on buying a new car key. But they don’t have to, as a replacement can be bought for much less than the average main dealers charge from an auto locksmith, such as Inta-lock in Peterborough.

The reasons why auto locksmiths charge less are that we can purchase blank keys in bulk and at a lower rate, so we can pass those savings on to the customer. Our operating costs are also lower.

Another advantage is that auto locksmiths such as Inta-lock in Peterborough have is that our technicians are mobile and carry in their vans a wide range of blank keys, as well as the latest equipment that means they can come out to you and cut and programme replacement keys in less than an hour.

How we make replacement keys

Our team is equipped with the latest key cutting equipment and programming tools. For keys with a transponder chip, we can extract the security data from your car’s ECU and then input that information into a new transponder chip, which is then fitted to a new key, which will have been cut bespoke to your vehicle.

If the member of our team is replacing a key that has been lost or stolen, they will, using specialist software that is bespoke to auto locksmiths, tap into the car’s ECU and delete the data of the lost or stolen car key from its memory and replace it with the new key’s information, which will stop anyone that has found or stolen your keys from being able to drive away in your car.

For spare keys, our technicians are again cheaper than the alternatives, and they can come out to you and cut them while you wait so you can get back on with your day as quickly as possible.

So, if you need replacement car keys cut and programmed – no matter what the marque, model or age of the car – then call Inta-lock Locksmiths in Peterborough or email us today and one of our friendly staff can arrange for one of our qualified professionals to come out to you.

The cost of replacing your car keys will depend on the make, model, and age of your car. But our prices are transparent – we will give you a full quote up front and won’t charge extra for things like diagnostics – so you know exactly what you will be paying from the start. Our fees are competitive with any other auto locksmith in Peterborough and the surrounding area, but we pride ourselves on our customer service, which we believe is second to none.